Legendary writer and film maker Pier Paolo Pasolini visited here; we would have fed him, and he would have nourished us too.
The Gardeletta bridge was one of the locations for his last film.
You can see him at the camera, with the inn in the background.

35 minutes away
Pasolini in Bologna

We recommend you visit other locations on the Pasolini trail in central Bologna via this little-known site:
http://www.cineturismo.cinetecadibologna.it/itinerari/bologna/

The roof is reminiscent of a cockerel's crest, and is inspired by the mountains which overlook the church's façade. World-renowned Finnish architect Alvar Aalto used light to accompany the spirituality of Riola's inhabitants and visitors, making the spaces seem bigger by conveying it towards the altar and symbolically entering the baptistery from above.

I was so desperate that I wrote to Count Mattei in Milan. He sent me a book and some drops. May God bless him. (From The Brothers Karamazov)
The drops Dostoevsky talks about are part of Electrohomeopathy, an alternative treatment invented by Count Mattei, which was internationally popular at the time.

The Rocchetta holds many stories and secrets amongst its Moorish-style cupolas, towers, the Courtyard of the Lions and the hippogriff. You might feel like Mastroianni or the Cardinal in Enrico IV (Henry IV), directed by Marco Bellocchio in 1984.
What film would you shoot inside these walls?

Strolling around this extremely well-preserved borgo, or hamlet, is like walking through another era: it was a fortified lookout post for the Lombards and is peppered with symbols left by the Comacine masters, Lombard stonemasons who transformed the ancient towers into dwellings.
It will not be difficult to identify the cypress which is now over 700 years old.

Enjoy the sunset here, if you can. But not before you have looked around the inside of the Sanctuary, and above all the crypt. You will find a griffin, pelicans and lions. Don't forget that there was originally a pagan temple located here, and the mountain is known as “Montagna Sacra”, the sacred mountain.

The mountain between the Setta and Reno rivers offers a wide view over the landscape, which should not be enjoyed without remembering the tragic historical events which took place there in 1944.
We recommend downloading the Monte Sole app, where you will find the Itinerario della Memoria remembrance itinerary, maps, photos and videos.

Promotes experience-based workshops and initiatives for young people, adults and school groups in order to help develop peace and spread a culture of non-violence, respect for human rights and coexistence between human beings, not only respecting differences but considering them as assets.

Don't let yourself be intimidated by the history and take the time for a stroll on the site of the ancient Etruscan city of Kainua, which will lead you to the acropolis and necropolis. This small museum is worth a visit, with some finds dating back to 2,500 years ago.

A symbol of the Romanesque art of the Bolognese Apennines, this building has undergone various renovations and restorations over the years. The first records of this three-nave sandstone church date back to 1030. Noteworthy features include the apse with three single lancet windows richly decorated with geometric and horticultural motifs.

Dive into the contemporary. On the occasion of the Pennelli Ribelli festival, some of the best Italian street artists have decorated the site of the former paper factory.
Have you heard of Ericailcane, Nemo's, Kiki Skipi (in the photo), Collettivo FX or Andrea Casciu? Now you will find them on the right bank of the Reno. They even get a mention in Brooklyn Street Art.

The belling of the deer – September/October
www.discoveraltorenoterme.it

Autumn is mating season for deer. The sound you will hear is the call of the males communicating their power and superiority in the conquest of groups of females.
Remember not to disturb the deer and other animals, and to proceed at moderate speed along the mountain roads.

It is not unusual to come across these animals on the road at hight. The most difficult to spot is naturally the wolf, but guided excursions are available to find their tracks and learn about their habits.
Lupo – Italian for wolf – was the name chosen by the leader of the Brigata Stella Rossa brigade of partisan resistance fighters during the war, and is also the nickname of famous writer Stefano Benni who, not by chance, is originally from the area.

Three-dimensional targets for a night-time archery experience led by instructor Mauro Fava. Technical shooting, a variety of environments, safe targets and route, easy recovery of arrows. The activity is also available during the day.

You can scan the skies on clear evenings with the aid of the local astronomy enthusiasts’ association, Associazione Astrofili Bolognesi. You will see planets such as Mars, Jupiter and Saturn, constellations such as the Pleiades and Perseus, and entire galaxies such as Andromeda. And who knows, maybe you will be the first to discover new forms of life!

45 minutes away
The spa town of Porretta Terme
www.helvetiabenessere.it

Until 11 p.m. every evening you can enjoy the swimming pool with spa water, the itinerary with hot and cold water for the legs, the sauna, and Turkish bath with chromotherapy. 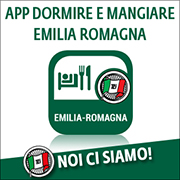